I don’t know how long it has been since we bought these tickets, but I do know that it has been a long time.

We made the 2 hour or so long drive to Trenton, New Jersey. I had only been here once before, but I have an idea of how it is setup. No outfield seats, crummy bullpen, not much to see, and access to any part of dugout. But I had not been there as a baseball collector. There would be a Home Run Derby before the game, and I wanted to catch a baseball during it, so I needed to tour the outside of the stadium. But that would be put on hold for a bit because I needed to buy some Eastern League Baseballs. I got two of them because I figured it’d be odd to get Minor Leaguers on Major League Baseballs. So I bought the baseballs, but then a bunch of autograph collectors flipped open some binders and ran off to near the clubhouse entrance.

Naturally I ran over there as well, and when I got there, I saw three different player signing autographs. I took out two baseballs and went to Reegie Corona who signed my 1st autograph. 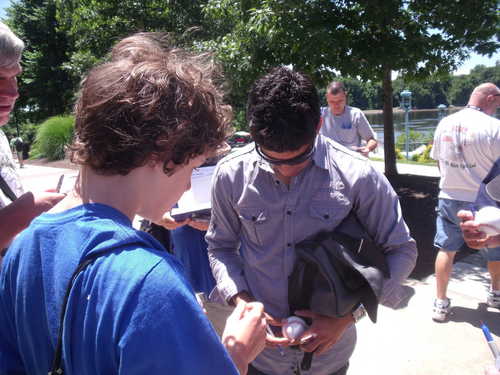 Then I went to Jorge Vazquez who signed my 2nd autograph. 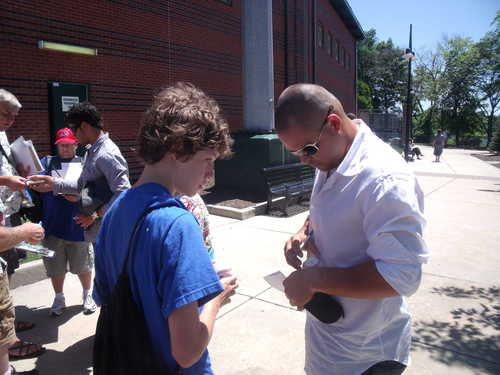 Then I went over to Eduardo Nunez for my 3rd autograph. 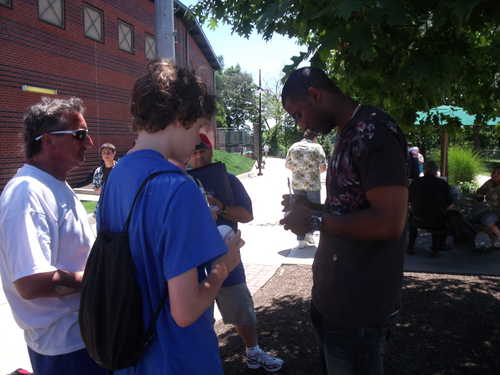 So after that I finally went on the tour of the outside. There were many different points from which you could see the field, such as this one: 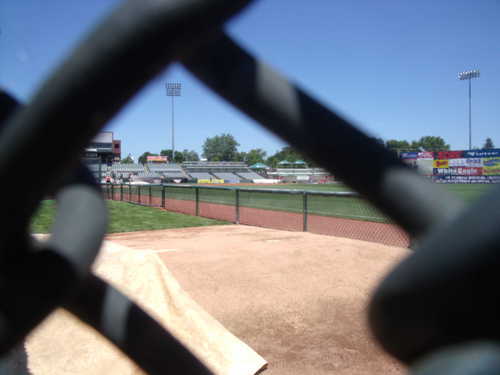 Did you notice that off on the other side of the field were some players? That was the Southern Division (the All-Star teams were divided into Northern Division and Southern Division. After I finished my tour, I walked over there for a peek. There was another spot in a fence over there where you could see the field, which you can see in this photo from later on: 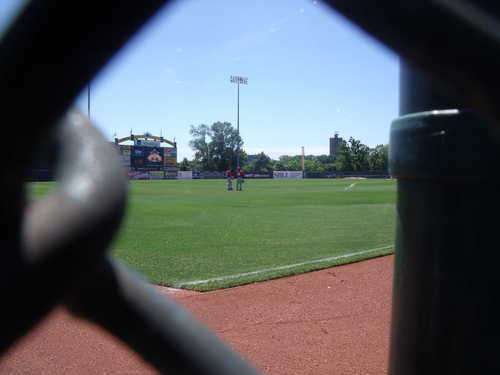 At that moment they were warming up, and the guy right near me warming up was Chad Thall. As soon as I got there a ball tipped off the end of his glove and rolled to the wall. He saw me looking through the wall, took the ball and said: “Here ya’ go buddy,” and flipped the ball over the wall to me, my 1st ball. 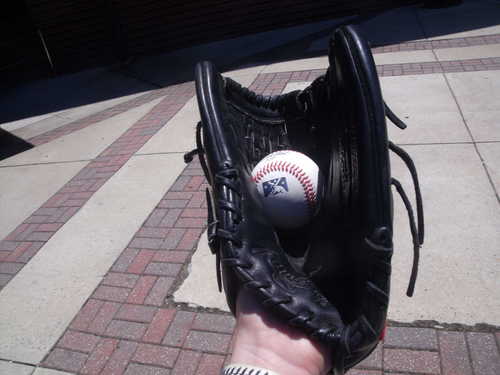 I wasn’t even expecting that I would get a ball there, but I’ll take it anyway. So even before the gates open I had 3 autographs and 1 baseball. Another thing that they would be doing later would be an autograph session when each player would be signing along the foul lines, so when I ran in you couldn’t get the players to sign. Some people asked the players and ushers told them to wait until the autograph session. I wouldn’t have to do nothing for 1 hour because thanks to the Thunder’s awesome re-entry policy I was able to go outside and try my luck for BP home runs, and my neck was looking at this the entire time: 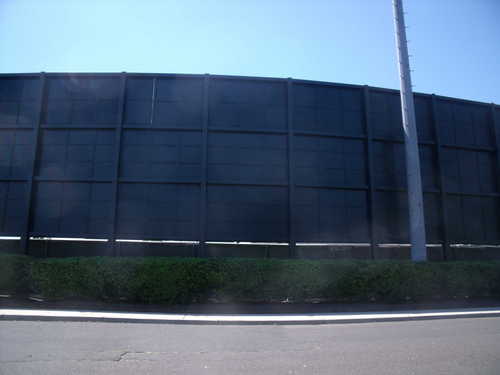 I guess that I under-expected people because there were at least 10 people out there doing the same thing as me. There were a few balls that cleared the outfield wall, but there was another wall that made balls drop to just behind the outfield wall, and here is a photo that sorta shows it: 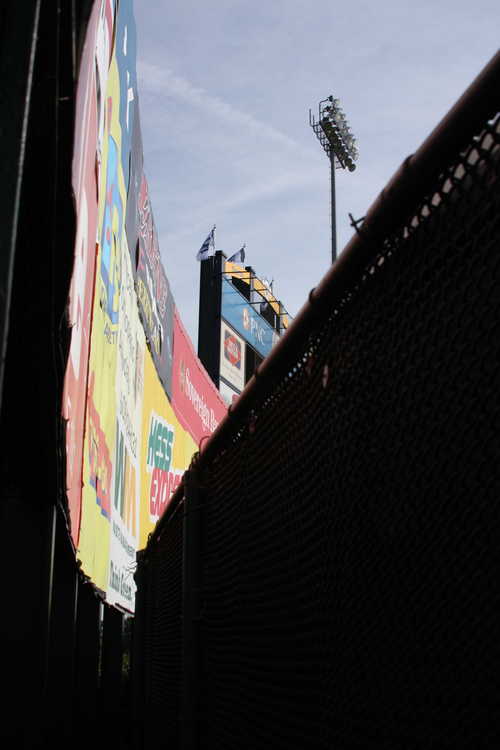 Remember where I got the ball from Chad Thall? The Southern Division was shagging in the outfield, and I looked up who was the player closest to me. He was Roy Merrit, and when I ball was hit within asking range I said:

“Roy, could I have that ball?”

Well I have no clue at all why he did this, but he threw it up against the scoreboard and it plopped down onto the field and then he tossed the ball over in my direction. It landed on the street and there was an adult next to me, so he started going for it, but then backed off when he realized it was for me, so I ran it down and grabbed my 3rd ball.

Pretty soon after I got that ball the crowd of 10 swelled to about 20 adults 30 feet back and 8 kids 3 feet back. By then I just decided to head back inside, and inside all the lines for the autograph sessions had formed. I picked a spot by the home team’s dugout and sat there for the rest of BP. I asked Brock Bond for a ball by the net and he was nice enough to run out there, grab the ball, and toss it to me for my 4th ball. In the phot below he is the guy all the way on the right in the group of players to the left of m splint. 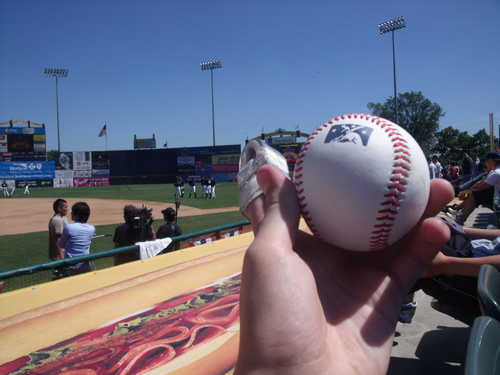 When BP ended I didn’t get anything when they came in, but I got on line for the Akron Aeros because I particularly like Carlos Santana, and when the autograph session started I asked for his batting gloves at the end of the game.

But here is the order on what autograph was my 4th, 5th, 6th, 7th… during the autograph session. 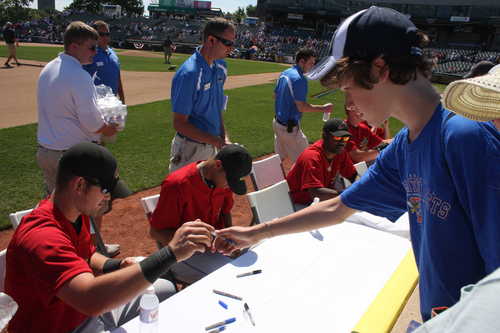 Then I went over to the New Britain Rock Cats: 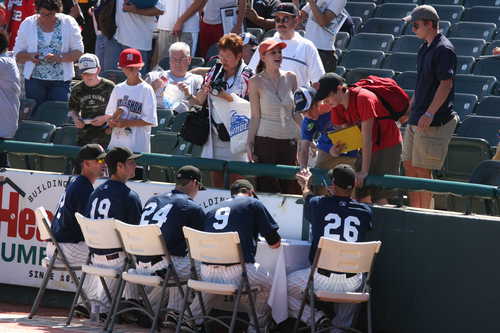 Then off I went over to the Portland Sea Dogs: 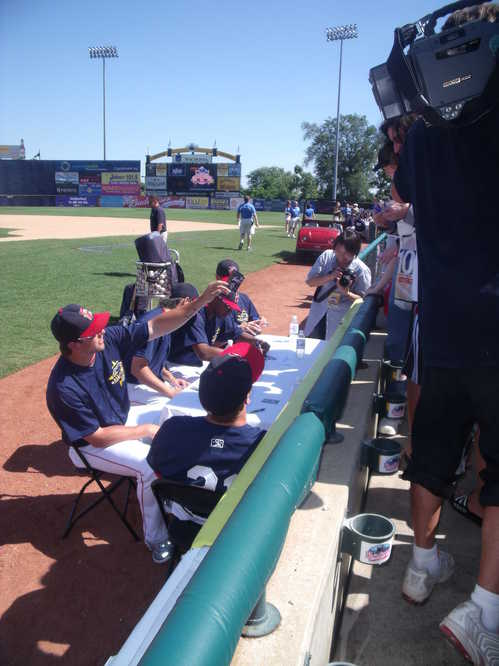 Then I went over to the Harrisburg Senators: 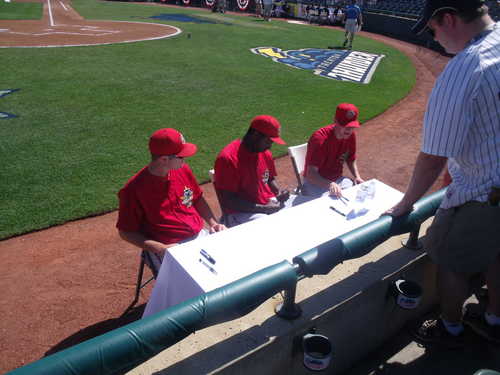 Then I went over to the Altoona Curve: 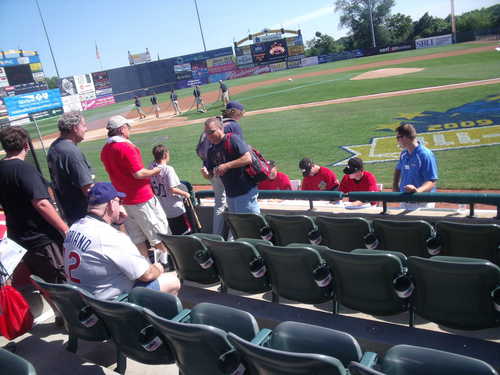 Then I went over to the Connecticut Defenders: 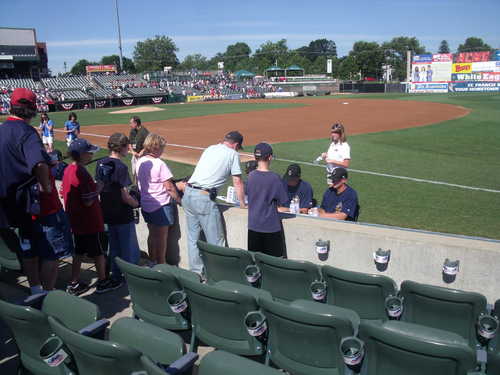 Then I went over to the Trenton Thunder with a few minutes to spare: 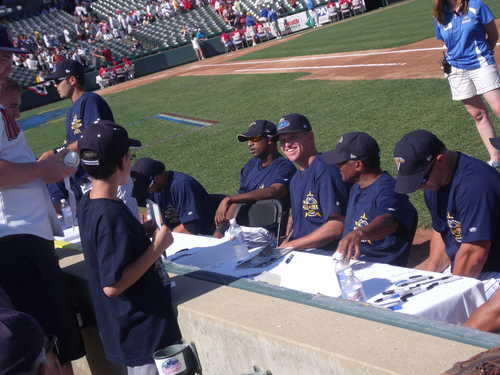 There was more Trenton Thunder players, but the autograph session ended right when I was at the Thunder, so the last player during the autograph session that I was able to get was Jesus Montero, the #3 prospect in all of Minor League Baseball. But as they were heading off the field I was able to get Thunder Pitching Coach Tommy Philips to sign my 34th autograph. So not bad for 1 hour and 15 minutes; I averaged 1 autograph for every 2 minutes and 12 seconds.

Soon after the Home Run Derby would start, so I went back outside. Early on I didn’t see any position from which you could see the field AND be in a good spot to catch a ball. There was a view good for lefties where you could look through the scoreboard to judge balls, but then had to run back to get in position. 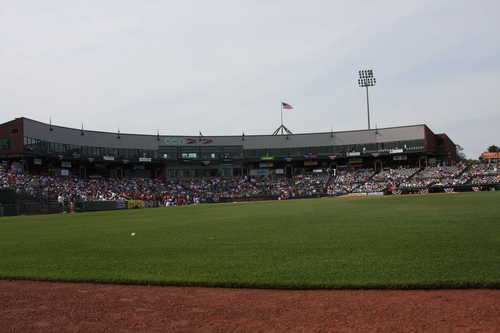 Then there was the spot where I got the balls from Roy Merrit and Chad Thall, but you had to run back even further. There was another spot where you could stand on an air vent and be able to clearly see the field, but I was told by an employee to get off it. 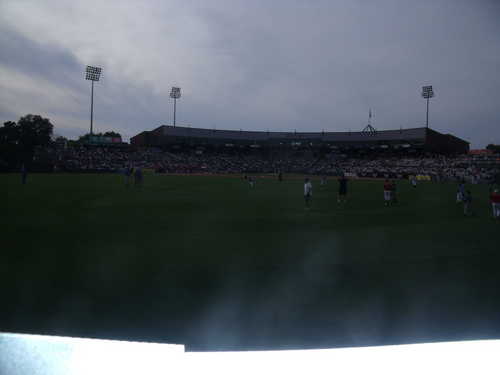 Then near the end I realized why most of the adults were in one crowded spot; you could see the batter and run *forward* for balls. So that is where I stood for righties, but competition was insane and I couldn’t get anything.

Nothing for me at the Home Run Derby, High-Schooler out-slugged 2 of the Top 25 Best Prospects, and other who were in this year’s Futures’ Game. I had to wait for an hour for the game to start, and spent the time by watching the players warm-up. I also asked Brian Friday for his batting gloves at the end of the game.

“Sure just be by the dugout.”

One maybe and one definite.

I didn’t try that hard to get baseballs during the game though. But in the top of the 6th I took off for the Northern Division’s dugout to try and get a ball. I was going to the outfield end, but then a pop up was hit to Jorge Jimenez at third base. So I rushed down to where he was going to go in and he flipped the ball high up. I’m talking about 40 feet or so, plenty of time for someone to interfere. Well I backed up, reached up, caught it, and got my glove knocked by an adult who made an effort at the last second, but my 5th ball was still in the glove, barely. 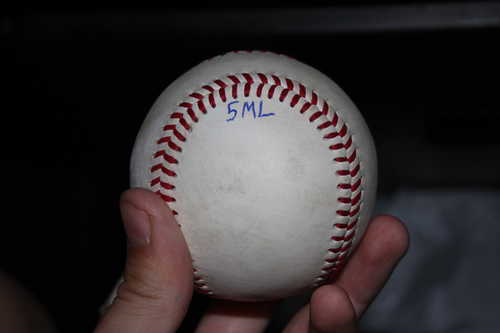 I had seats right behind the dugout where I wanted to be because I got tickets so early, so I didn’t have to move much to get a seat. Well I wasn’t the only one who wanted to be at the inner corner of the dugout because when a ground ball was hit with 2 outs in the 9th about 20 people charged the dugout. The ball went through the hole and there was at least one more ball to be thrown. When the real thing happened though, the same 20 people rushed down and I was able to get a spot just where I wanted. 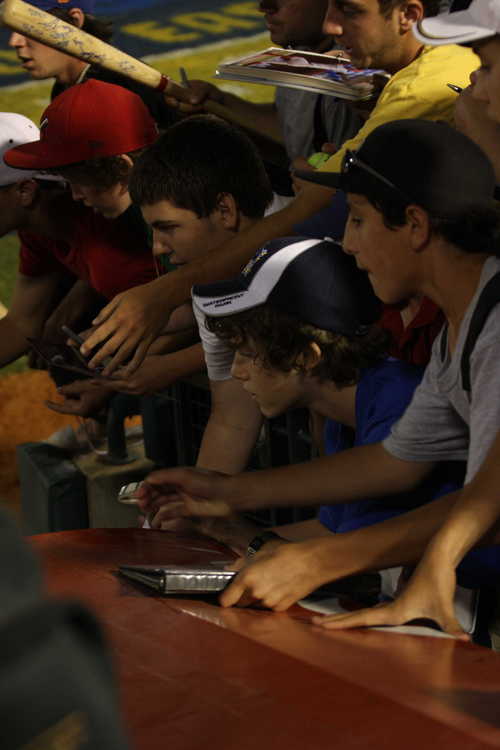 The Southern Division won (correct dugout) so they all came back on the field. While Brian Friday was on the top step of the dugout I called him out and he remembered me. So when he got over to me, he handed me a pair of batting gloves, my 1st game used item of the day. 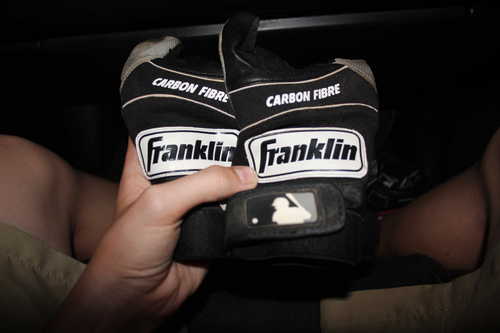 1 out of 1, would it be 2 out of 2? Nope, Carlos Santana snubbed me. Can’t always have it your way, like I asked Jesus Montero for his wristband, but he wouldn’t give it away. I am not sure when the next time this 2 hour drive will be made.