This was the 2009 World Series, the second straight year I’ve gone.

I got there a while before the gates were to open, but somehow another ballhawk arrived even earlier. He was Joe (http://baseballexperiences.mlblogs.com). I didn’t mind that he was there, as I knew we weren’t going to be making each other loose baseballs. We played catch for a bit, but the Yankees started setting up the gates (yeah, we arrived before they even set up), so we had to get on line. But before we did we asked a worker if batting practice was being set up, it was. We were luckily at the front of the line, which was pretty huge, and our line was about 1 of the 4 lines set up:

But I didn’t even expect batting practice to start until a couple dozen minutes after. When we ran inside (I got delayed because the worker had to check me again after he did so minutes before the gates opened) batting practice was already in around the second set of swings for the first round of batters. Because I got delayed, there were people who entered the seats before me, and all of the Easter Eggs were long gone. But that didn’t worry me, because moments after I entered, Damaso Marte fielded a ball in front of the seats which held very little people. Joe had gotten a ball before me, so he let me get the ball from Damaso, my 1st ball. Surprisingly, it was a commemorative baseball, and unsurprisingly it wasn’t a World Series ball. It was a New Yankee Stadium commemorative, which I had dozens of already. 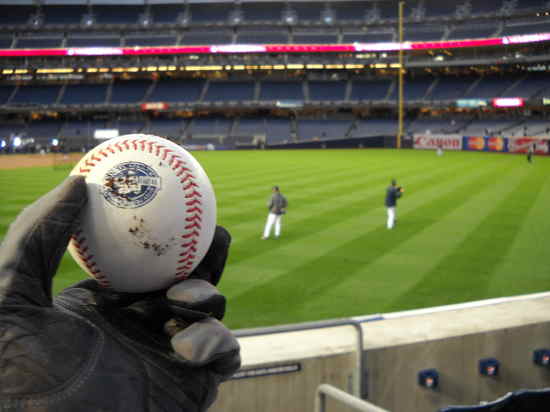 But the seats got filled up quickly and deeply, so I tried moving to Left Field. But that was a dumb move as ball after ball was pelted into the Right Field seats, while Left Field was completely dead. I had to wait for the Phillies to come up to bat. And since the main sluggers were lefty, and the righty hitters weren’t in the first round of BP, I moved over to the foul line where the Phillies players were throwing. As I recall it (yes, it’s been so long that I’ve forgotten a lot of the details of both games) was slightly drizzling, so when I got Mick Billmeyer to toss me a ball from over a 100ft away and it sailed over my head, the ball was wet when I tracked it down and got my 2nd ball.

By that point the Phillies hitters were finally getting hot in the cage, so I gradually made my way back to Left Field where Joe was there. He would’ve been having a much better day than me by that point, but I saw him get robbed numerous times by numerous people in the outfield. It really was hectic all of batting practice because since the Yankees started BP before the gates opened, the time when they usually kicked people out (1 hour and 40 minutes after the gates open) was after batting practice had ended. So everybody could see all of BP down on field level. You can see the huge crowd and Joe and me in the next photo, with an arrow pointing to Joe and me. 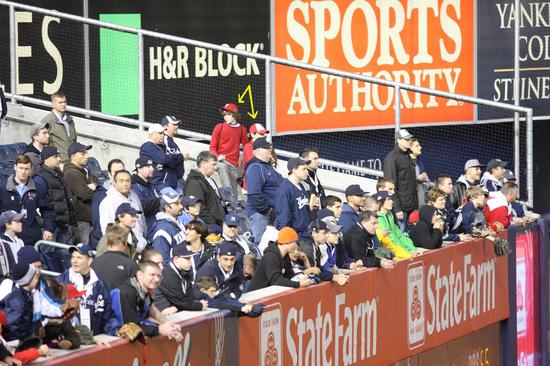 Even though I am about as tall as some adults I could barely see the warning track from a standing on the stairs position, so when Miguel Cairo went to get a ball on the warning track, I had to stand on a seat to see where he was going. He ended up tossing the ball to me, but because it was a melee my hat fell off and the seat I was standing on folded up, trapping my foot. Now I wouldn’t be telling you this story had I not gotten the ball, so yeah I got my 3rd ball. Some people behind me claimed the ball was tossed to them, even though I was the Phillies fan standing out, while they were buried in the crowd.

I wasn’t necessarily interested in autographs since I didn’t have a streak going, but when I saw a player signing at the foul line, I couldn’t refuse. I went over there, saw it was Scott Eyre, and had him sign my 1st autograph.

The outfield was still dead, so the only hot spot to me was the corner spot next to the Left Field bleachers. I was able to get a ball there, from Joe Blanton who is just to the left of my 4th ball, which is in my glove.

That was my last one for batting practice. Now this is probably the most crowded I had ever seen a concourse before:

It was ridiculous. They decided to put a lovely patio outside of the Legends restaurant (which provided a lovely view of 10 people, changing every 10 minutes) and a band next to a food vendor. The concession stand, which included a going grill, was pushed back on one occasion, making everyone nervous. In order to get out of there, I had to cut through the Legends patio, and it still took me about 10 minutes.

Joe and I spent most of the game going to third out balls behind the Yankees dugout, but they weren’t being tossed above the Legends seats. The one time that they tossed the ball up above the Legends seats I was sitting in a seat because I had decided not to go down because I wanted to stay put for an inning. So I didn’t get another ball, but I did get one more autograph before I headed home.

After the players had come in after the game ended Joe and I ran out to the Legends exit because some notable people were sitting in there, all of whom I forget except Alec Baldwin, because I got his autograph, my 2nd autograph, and you can see him walking away next to a guard with a bag in his hand: